This VulnHub writeup is based on Straylight - part one of the excellent Wintermute 1 series found on Vulnhub, created by creosote.

The Wintermute 1 series is designed to be similar to some of the challenges presented by the ‘OSCP’ (Offensive Security Certified Professional) labs. Skills such as pivoting are really put to the test in the series, and it certainly ticked the box for me in terms of learning new stuff.

Once we have the lab setup completed correctly, we’ll then jump into the first of the two machines - Straylight. Think of it as being a vulnerable machine that is Internet accessible.

In a follow-up article, we’ll focus on the second machine (Neuromancer) which is contained within a private subnet.

I don’t normally go into the specifics of setting up VirtualBox in a writeup, but since this operation involves two target machines over two sub-nets (plus an attacking box), some coverage is deemed necessary on this occasion.

You will need to be using an account with admin privileges as it involes creating new ethernet interfaces on your computer. For illustration purposes, I’m using VirtualBox 5.2.26 on a Windows 10 host.

Once you have opened VirtualBox, select Host Network Manager from the File menu, then click on the Create button. You will probably get a User Account Control prompt from Windows, and quite possibly a prompt for any endpoint protection software you may have running. That all depends how you have configured the security of your host computer. 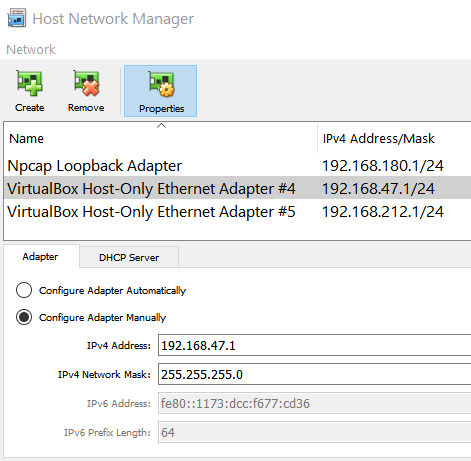 Although an IPv4 Address will specified for the adapter, VirtualBox will assume that you have opted to Configure Adapter Manually. This means that it won’t enable the DHCP server by default - go ahead and click on the tab with the same name, then click on Enable Server. You will see that VirtualBox now automatically assigns the given address information. Go ahead and adjust (if you really want to), before clicking on the Apply button.

You will need two NICs (Network Interface Cards), so repeat the exercise again. Once you have completed things, you should have something like the following (ignore the reference to Npcap Loopback Adapter): 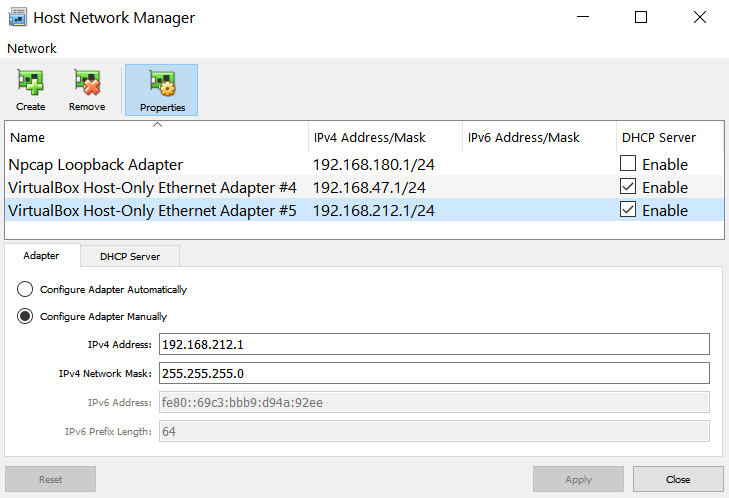 Take note of the fact that the NICs are numbered sequentially - this will be important when setting up the target machines and our attack box in VirtualBox.

At this point, you can click on the Close button for the Host Network Manager.

I’ll assume that you have already imported both the Straylight and Neuromancer machines as normal (I’ll get round to doing a VirtualBox complete beginners guide in a further article).

Next, open the settings for the ‘Straylight’ machine, and then click on the ‘Network’ item, followed by clicking on Adapter. Per the screenshot, ensure that Host-only Adapter is selected from the Attached to: drop-down menu and the first newly created NIC is specified in the Name: drop-down. In my case, #4 is the first of those new NICs: 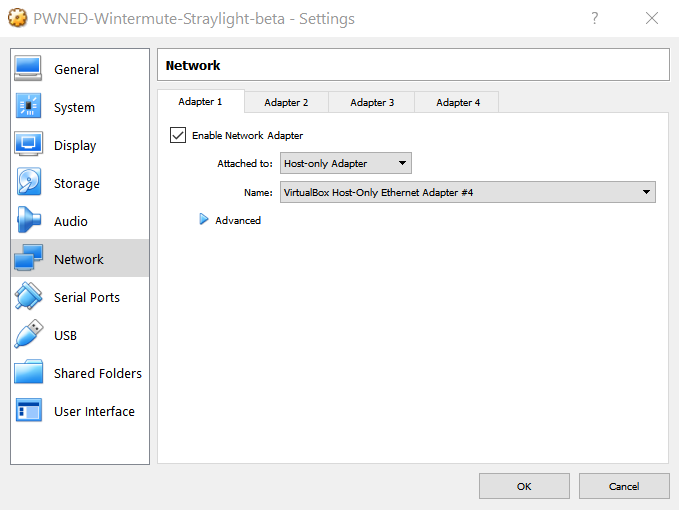 Ensure that Enable Network Adapter has been checked and then click on the Adapter 2 tab. In this instance, ensure that Host-Only Adapter is selected for the Attached to: drop-down and the second NIC in the sequence is specified for the Name: drop-down. 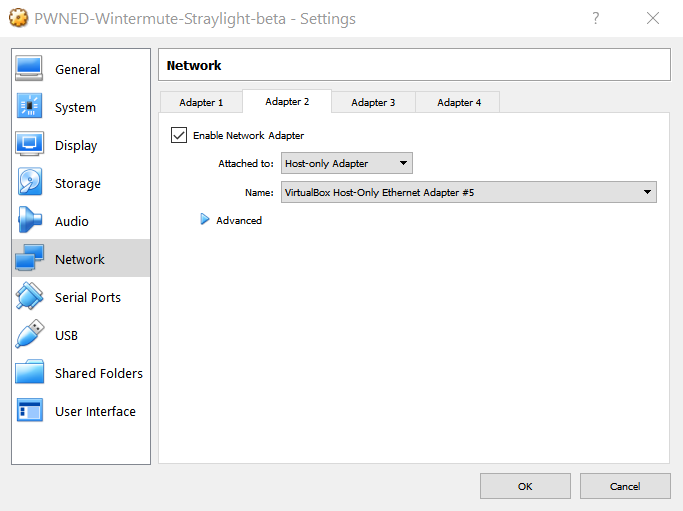 As for the first NIC, ensure that Enable Network Adapter has been checked, before clicking on the OK button.

Step 2: Assign the first Host-Only NIC to your attacking box

Your attacking box (Kali in my case) should only be able to access the Straylight computer directly. Select your attacking box from the list available in VirtualBox and then click Settings, followed by clicking on the Network option.

Select Host-Only Adapter from the Attached to: drop-down, and the first NIC in the series you just set up should be selected in the Name: drop-down. Ensure that Enable Network Adapter has been checked, before clicking on the OK button.

With the above all done, go ahead and start up all 3 machines in VirtualBox. Let the attacking begin! :-)

Firstly, we need to find where our first target is on the subnet accessible to our attacking Kali host. Netdiscover is used for the task.

The first 2 IPs are specific to the VirtualBox host-only adapter setup. From performing an ifconfig eth0 on my attacking box I can tell that it is using 192.168.47.3. That just leaves 192.168.47.4 to be the IP address for our first victim box.

We perform an 'all ports' TCP scan (-p-) to see what is open. T4 timing is a fast scan, without compromising accuracy. -Pn is specified as we already know the host is alive and don’t want a ping scan performed. Since we are are only working with IP addresses, we don’t need to resolve dns names to IP addresses. -sS is a syn (stealthy) scan, but I’m more interested in speed than being stealthy.

Finally, to speed things up further, if a specific probe operation fails, nmap is told to retry it only once (--max-retries=1) before moving on.

We can now do a dedicated scan on just the open ports. A full TCP connect (-sT) is used along with the agressive scanning option (-A). Results are output in all formats (-oA) with the given file stem name.

At this stage, we need to take a look at the web applications on port 80 and 3000 in a web browser … possibly followed by some brute-forcing of directories.

So it looks like a piece of ‘video art’ … 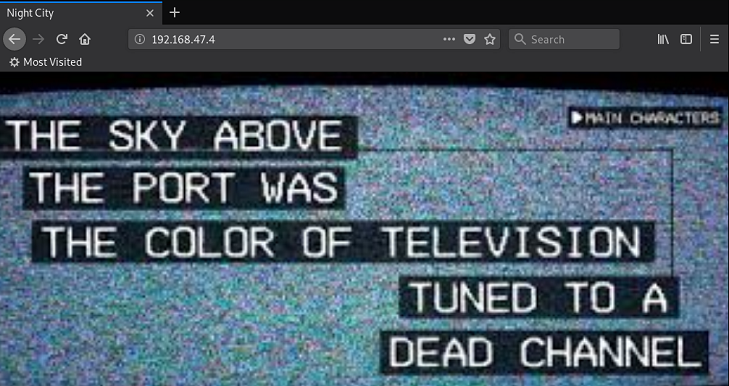 After a couple of seconds it redirects into a funky automated ‘green screen’ animated message (kinda like WOPR from War Games!): 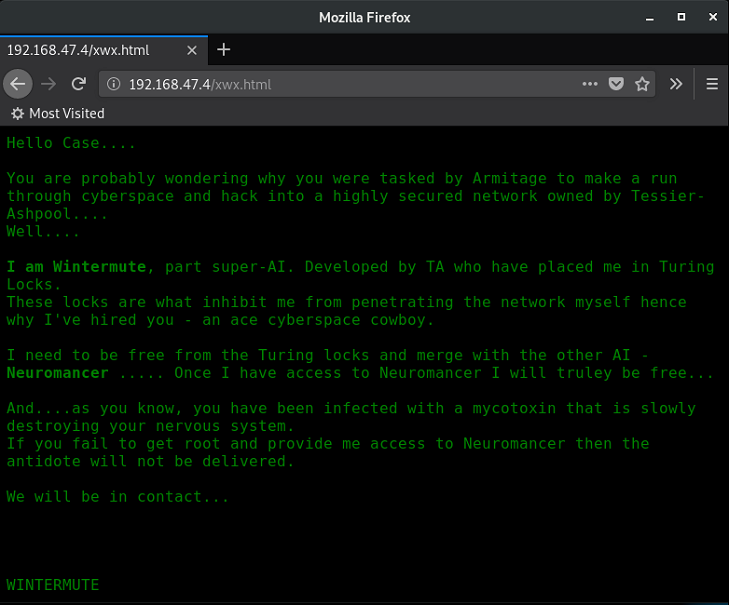 Some possible usernames perhaps for later. Examining the HTML leads to a .js file, but that doesn’t containing anything of interest. Moving on to the app on TCP 3000.

We are presented with a login screen - the hint for the username/password combo are too tempting to passup: 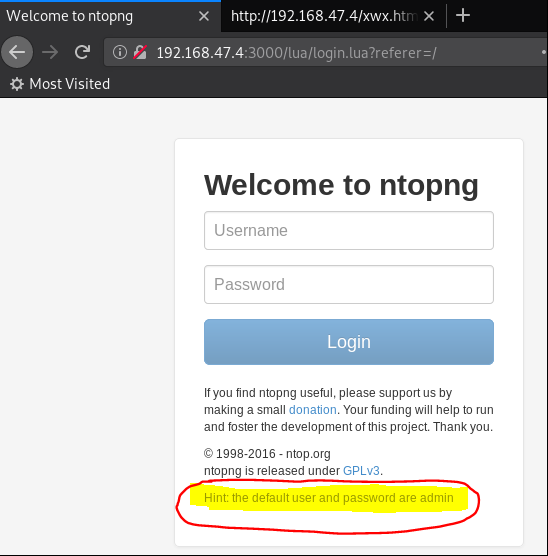 So … it looks like some sort of network management tool on first glance. 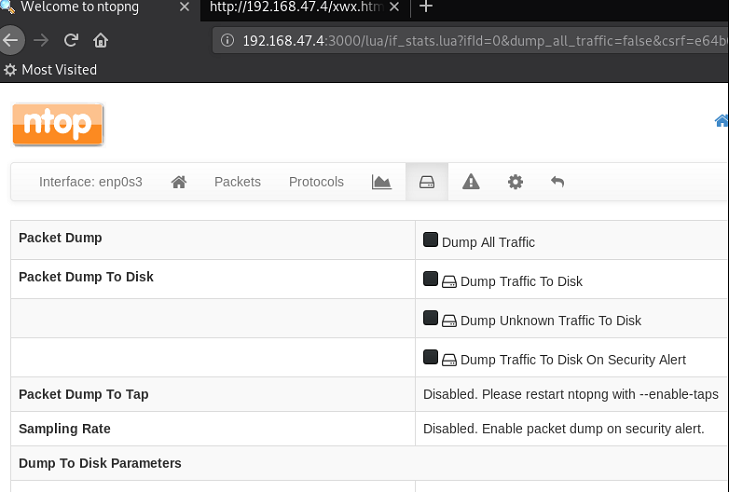 Browsing around some more, an ‘Active Flows’ page is found. The ‘info’ colulmn looks interesting …. it APPEARS to be pointing towards a web application (probably on TCP port 80 as 3000 appears to be used for the ntopng tool). 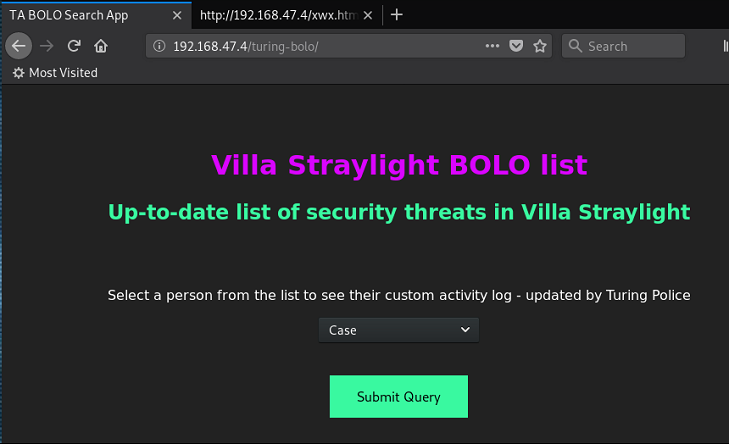 So … some sort of activity viewing log capability. The default choice (‘Case’) is kept before hitting the ‘Submit Query’ button. 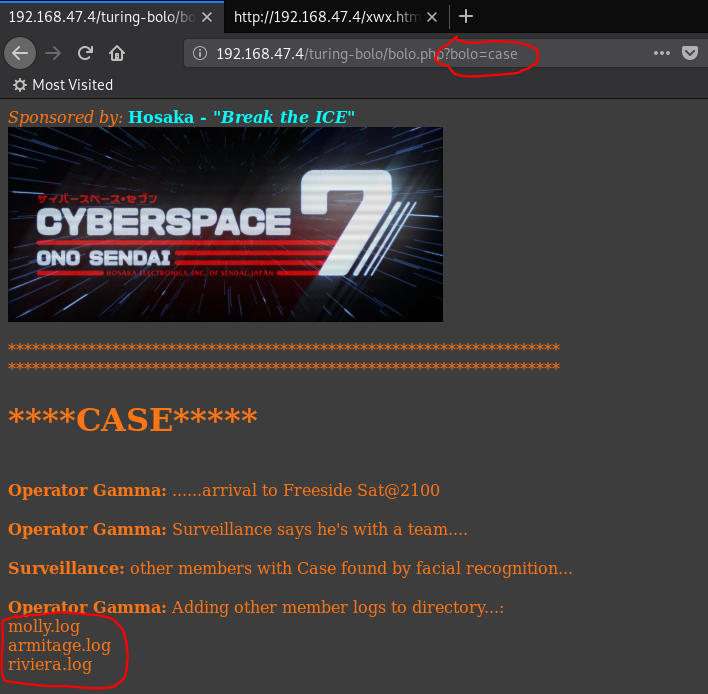 There is a query string parameter called ‘bolo’ … it appears to be attaching ‘.log’ onto the end and then pulling the contents of the given log file. This looks ripe perhaps for some ‘local file inclusion’ (‘LFI’) exploitation.

We know that an SMTP (mail) server is running on TCP 25. Let’s see what happens when an attempt is made to acceess the mail logs. After some trial and error with directory traversal, the following URL is specified:

By viewing the HTML, we do indeed find the contents of /var/log/mail!

As a test, an attempt is made to to perform a ‘whoami’ command:

… which results in the following (snippet):

Even though the presentation is a little bit mangled, the correct data is coming back.

A further example is performed to dump the contents of ‘/etc/passwd’:

The above give us some interesting user accounts (wintermute, turing-police) for later follow-up/usage:

Now that we have a working web-shell in place, we can use it to transfer a reverse shell. The tried and test php reverse shell from pentestmonkey

Two modifications are bade for ip and port:

A python web server (python -m SimpleHTTPServer) is set up on the attacking box, followed by running a ‘wget’ command with the webshell established earlier:

The reverse shell was then made executable. The normal chmod +x route refused to work, so I stuck to the numerical format chmod 755:

Note: It’s always good to know multiple ways of doing the same thing. No two targets are going to have the EXACT same configuration and your favourite tools mightn’t be installed.

A listener was then established on the attacking Kali box, followed by triggering the reverse shell:

Yay …. it worked - we have a reverse shell! A TTY was then established:

Onwards to privesc then …

The a copy of LinEnum is transferred to the target (via wget), made executable and then run as follows:

Multiple -k switches are used to define variations on the term password, as well as specifying the ‘thorough’ option (-t)

Once the report is run, it is reviewed line by line. Anything SUID related always catches my attention and soon enough the following is reviewed:

Anything with a version number in the file name tends to stand out … so a searchsploit is made for screen 4.5:

Examining the exploit code for 41154.sh (a snippet only):

So, there is a dependency on having gcc installed. Thankfully the output from LinEnum confirms that it is (you can also confirm this with which gcc):

I opted to manually construct the exploit in the straylight reverse shell. First up is the block of code to create /tmp/libhax.c. It gets saved fine to disk:

libhax.c is compiled as a shared object:

Since only warnings are received, they can be ignored.

The next block for ‘rootshell.c’ is pasted into the reverse shell and then compiled. Again, there are warnings, but they too are ignored:

The remainder of the exploit is copied/pasted and executed … lo and behold, we have a nice root shell!

And finally we convert to a proper TTY session and dump the contents of /root/flag.txt:

Step 0: Looking around for easy to find files

Since we are having to compromise a second machine, we need to do some post-exploitation on Straylight (beyond grabbing a flag). We start off by looking around the folder structure on Straylight:

We can see a file called ‘note.txt’:

Plenty of clues then. So, there is a second network called ‘admin’ and a massive clue about potential exploitation paths … ‘Struts’

So … a dual homed machine

About jckhmr.net
Hello, my name is Leo McCavana & I am a Red Team Operator with a passion for utilizing DevOps principles in all aspects of Offensive Security and passing that knowledge onto others. I've now got the bug for public speaking - you can find details of talks I've given on this site - just look for the 'talks by me' tag. All comments are mine and are not in any way reflective of the policies of my employer.